Data Anonymisation is the process of encrypting or removing personal data or personally identifiable data (in order to protect private or sensitive information) from data sets so that the person can no longer be identified directly or indirectly.  Identifiers such as contact data, names, addresses, social security numbers etc., are erased or encrypted so the individual cannot be traced back to the stored data. When a person cannot be re-identified the data is no longer considered personal data and GDPR does not apply. Running software such as MAPA’s open source docker will make personal data disappear through Anonymisation or Pseudonymisation techniques, making it possible for Public Administrations to easily deploy truly multilingual anonymisation to their data sets.

However, there is always a possibility that even data is cleared of identifiers, attackers could use de-anonymisation techniques in a sort of back-engineering to link the anonymised personal data to the person. Since data usually may be transferred through multiple sources and some can be available to the public, potential de-anonymisation techniques could cross-reference the sources and reveal personal information.

The General Data Protection Regulation (GDPR) outlines a specific set of rules that protect citizens and user data and create transparency in information sharing. GDPR is the strictest data privacy regulation in the world, but it allows companies to collect anonymised data without consent, use it for any purpose, and store it for an indefinite time as long as companies remove all identifiers from the data.

could be pseudoanonymised with MAPA as

Note that not only names but also political affiliation has been substituted in order to mask any trace. Also, there is no relation between the original gender and the pseudonymised. Of course, we could apply world knowledge and find out who the Minister for Universities is, and that is why the “Minister” term has also been pseudonymised. Political affiliation has been masked, too, using synthetic random data (see below). Thus, the table could belong to any job category. Pseudonymization preserves statistical accuracy and data integrity, allowing the modified data to be used for training, development, testing, and analytics while protecting data privacy.

GDPR stipulates that websites have to obtain explicit consent from their users to collect personal information such as IP addresses, device ID, and cookies, something that all website managers are aware of nowadays. GDPR does not tend to speak about full data anonymisation as that would have to absolutely guarantee that even applying external knowledge the individual or individuals mentioned in a data set could not be identified. Also, data anonymisation is an irreversible process and that is why the technique usually applied is pseudonymisation. Commercially speaking, collecting anonymous data and deleting the identifiers from the database limits the ability to derive value and insights from it. However, it allows Public Administrations to comply with Open Data directives and share citizens’ data safely. The Multilingual Anonymisation for Public Administrations (MAPA) project has been created with the needs of Public Administrations in mind. In commercial environments, anonymised data clearly loses value as it cannot be used for marketing efforts, or to personalize the website’s user experience. The selling of un-anonymised personal data is strictly forbidden.

In our first blog post, we examine differences between Anonymisation and Pseudonymisation.

It is interesting to note that GDPR’s recommendation is to pseudonymise personal data wherever possible. A fundamental principle of the EU’s General Data Protection Regulation (GDPR), which came into force on 25 May 2018, is the recommendation to pseudonymise personal data wherever possible. Articles 4, 6, 25, 32, 40 and 89, as well as recitals 28, 29, 75, 78, 85 and 156 of the GDPR, explicitly mention pseudonymisation. While this is deemed sufficient, it does not preclude other means of data protection (Recital 28). GDPR does not refer to anonymisation anywhere in those articles and recitals.

What do we mean by Anonymisation and Pseudonymisation

Let’s look at an ideal and perfect scenario: anonymization. According to GDPR, anonymisation is the processing of data so that it cannot be identifiable as being associated with a particular individual. For a truly effective anonymisation, it has to become impossible for readers of the resulting data to carry out the identification of the person originally associated with the data – even with the help of other knowledge about the anonymised data.

This ideal scenario presents a problem for data controllers and data processors because the data is also rendered useless for most analytics. Let’s have a look at the anonymisation options below. 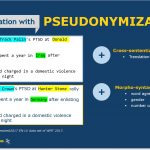 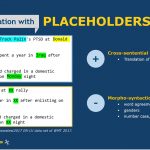 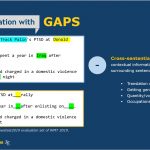 In the next blog post of our GDPR compliance series, we will review all these techniques and how they can become useful for Public Administrations, the focus of our project, as well as common element-level protection techniques. We will also show and map anonymisation and pseudonymisation to those techniques.

Doing without the ability to do valuable analytics could be one explanation for GDPR’s omission of the terms anonymisation. Nevertheless, anonymized data can still be useful for development and testing use cases and MAPA will provide the three options as part of its deliverables.

after anonymisation, the table could look like the one below (Fig 2).

Which is provides extreme untraceability and looks very secure but it is of little use we plan to process it in any way since the process is irreversible.

Now let’s consider pseudonymization. Let us assume that in addition to the “Department” column the “Salary” column is also not modified for whatever reason (for example being an item that has not been identified as essential in our anonymization procedures or we are using a software that does not allow to do that). The following table (Fig 3) results from that action rather than the table in Fig 2.

Fig 3 — Table after Pseudonymisation (Case A).

Note that every cell in the spreadsheet has been modified in Fig 3 just as in Fig 2, except “Department”. The assumption is that each department consists of more than one person and, therefore, getting back to the original data is not possible, even if we made use of additional external information. However, if Sales or Engineering were a single-person department, then we could have the person’s record. But as all the other values apart from “Department” are also anonymized, obtaining or finding out that external information would be useless to anyone with access to the record.

But let’s assume our anonymization software does not take salary information to be relevant (in fact, it is not a stated requirement of either GDPR, CCPA / HIPPA / NIST, Japanese APPI or Brazilian LGPD).

Fig 3 — Table after Pseudonymisation (Case B)

If President Janalyn Czerwinski (row 3) had not been in the data set, this pseudoanonymised Case B would have been equivalent to an anonymized set. However, since the “Salary” record has not been modified, the significant outlier in that column (over €490,000) gives away the identity and salary information of the highest official. To put it simple, the knowledge that the President or the person with the highest responsibility in an organisation is likely to earn well above everyone else basically re-identifies the record even though it has been pseudonymised.

In all the examples above, since the number of fields transformed is substantial in comparison with the total number of fields, the data, while usable for testing, is rendered useless for meaningful analysis. To be able to draw meaningful conclusions, the fields of interest in analysis need to be available without transformation —or at least be in the same range— so that aggregate results are the same.

Organisations, from Public Administrations to corporations, should have an insight into the data they are processing. They should also minimise the use, collection, and retention of PII or Personal Data to what is strictly necessary to accomplish their business purpose, and implement proper procedures and technical and organisational safeguards.

The degree of anonymization and indeed whether a data set is irreversibly anonymized or pseudonymized for further processing and the variety of techniques greatly depend on the nature of the un-transformed data and how much it might reveal. In our example today, that “sufficient additional information” is the logical assumption that the President of an organisation is very likely the highest paid employee in the company. Additional information might be public information or data available in other tables or data stores in the organization.